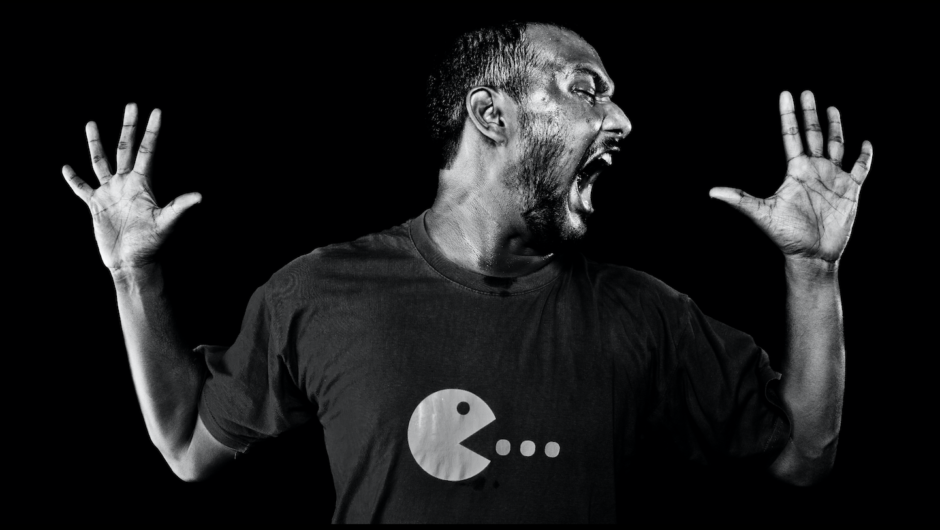 Deepak has been on the Bangalore dance scene for a while. In a way he was among the first of the now many “independent contemporary dance artists” in the city and as a result has taught, choreographed and mentored many young dancers.

His journey as a dancer began with popular dance and he admittedly was addicted to the adrenaline – “You got it from many ways and one of them was dance!”

He was in the entertainment industry and that meant catering the work to suit the market trends. But even the very young Deepak found this kind of authority problematic.

Something in him has always rebelled. Those who know him, know that he brings a kind of sharp and cynical humour into the room almost as he walks in. Under these trademark ‘Deepak jokes’ that never fail to indicate his presence, because usually around him is a circle of people holding their bellies and laughing, is a kind of… dare I say it – Love. Love for equality, honesty, democratic values and that very essence of Deepak, a deep love for the human ability to ask questions. He vociferously detests hierarchical ways of categorising humans as is evident in his award-winning piece which comments on caste and class – NH7. This is something he experienced slight freedom from during his time in Europe as a student at Salzburg Experimental Academy of Dance (SEAD). “I could be a cleaner in a theatre and then at 6.30pm find myself drinking a beer with the boss at a bar,” he elaborates.

“In this country we don’t differentiate between the labour and the labourer, for instance a dancer is always a dancer, not just a human… like isn’t a policeman a human?! Am I dancer?! NO… I do dance.” He disagrees with the notion of one’s entire embodied identity being attributed to what they do.

This divide was present in a somewhat healthier way in the west. But Deepak being Deepak, asked questions there too. He sensed the unspoken pressure to give in to the exotic lens through which he was often being viewed as an Indian artist in a white country. He sensed the temptation that one could fall into, wherein giving into cultural presuppositions and desires of the western eye may actually ensure funding and an economically stable future for an artist like himself. Like the young cinematic choreographer of all those years ago who had left his source of income because, he declared, “I won’t do what you ask me to”, the Deepak of a decade later was able to sense that he wouldn’t, in this particular European context, be able to make work that “means something.”

Deepak returned to India in 2011, almost nine years ago, and developed his solo LVOE at the Gati dance residency. It is almost as if the artist looked inward, at the flux and identity battle within; the east-west divide, the question of what is MY voice and how do I frame it! (He had been trying to hear his own creative voice after years of working for and with extremely well established creative voices.) And, how do I percolate ten years of dancing into this moment? – were a few of his inner conversations. He ended up making work that would be even more relevant eight years later. In Deepak’s own words, “When I made this work, we were at the beginning of the shit, now we are in the middle of it.”

As we sit here, surrounded and immersed in divisions and binaries, Deepak brings you a work that uses hats as a metaphor for diversity. It was created by a Europe returned artist in post Kargil India who looked at this sudden love for nation, leadership and military and scoffed at it.

“You have a nation, so you HAVE to love it?!” he wondered incredulously. “Do you really love your job! Your elected leader, your religion that won’t even allow you to breathe?!”

It is possible that we are at this moment in history more steeped in the discourse than all those years ago. Shoonya is honoured to have this no-nonsense human being perform his extremely relevant work for you at The Shoonya Ticket on the 29th and 30th of November and the 1st of December along with three other diverse acts around the theme of love.

Whilst sharply critiquing our conditioned behaviours and mob culture, Deepak is a believer in an efficient manifestation of that same energy as the community or the collective. He has experienced organised dance and art making structures both in Europe (at SEAD and working with several European choreographers) as well as in India where he was part of the Attakkalari Centre for Movement Arts for many years. He has, along with one of Bangalore’s favourite dance humans, Nakula Somana, started KHA (Sanskrit for ‘the space between the known and the unknown’) which they jointly envisioned to be a structure where hierarchies would rise and collapse organically. He admits that idea was utopian and calls it a “great experiment” that allowed him to “see what happens, when you (as an artist) have to locate yourself in capitalism.” Deepak has just returned to Bangalore after a stint in Delhi with Gati, and also working with artist Navtej Singh Johar.

Like other artists, he burns with the need to figure out this question of freedom and sustainability of the artist in a politically driven, capitalist environment where there is virtually no funding. He is grateful for his skills as a teacher that have helped him survive or, as he says, “basically gave me the bread, not even the butter!”

When asked, what it is that he loves, he bursts into his infectious laugh and flippantly says, “I love hate!” But that is typical Deepak, throwing us off with his irony and mischief. Ask again, or wait a while and he reveals, “I love questions, they keep me alive. I love the fact that we ask questions…” and then he adds, gut-wrenchingly, with that politico-personal expansive knowing, “I hate that we don’t have that freedom anymore.”

Come watch Deepak along with three other stellar Bangalore artists next weekend. We do hope you will support the arts and be there to witness.