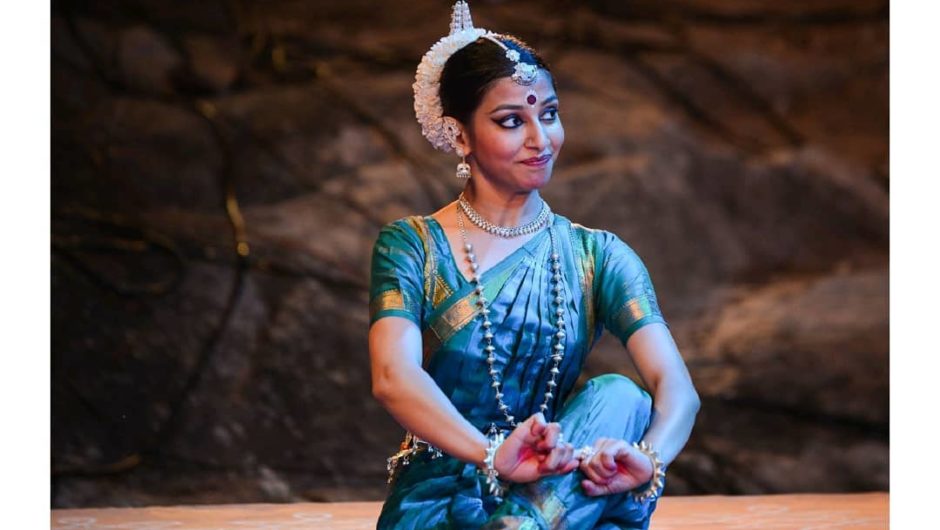 Barse Badariya is one of the songs Odissi dancer Akshiti will be dancing to this weekend at The Shoonya Ticket. It has been sung by Padmini Rao and is a Krishna bhajan. This is part of her repertoire for the evening which she has named, Ānurakti meaning “passionate love.” Ānurakti carries with it several emotions central to dance, art, and life itself – attachment, passion, desire, fondness, devotion, and of course, love.

To explore love this artist decided to use the opportunity to throw herself into the challenge of embracing what she is not comfortable with. “I am very uncomfortable showing love onstage,” says our dynamic artist of the evening. Barse Badariya is also about rain. “I don’t like rain,” says Akshiti “and I don’t believe in pretending.” In what seems very ‘Method actor’ style, this young woman recently immersed herself in the process by dancing and yearning for love while soaking in the rain on Udupi’s beaches. The experience became a vital part of her process for the performative aspect of the work.

“I am a fast mover” she adds, “but these songs, they demand stillness.”

Akshiti gradually began growing into the act of expressing love, immersing in the rain and invoking an inner stillness in order to create her new work. This embracing of parts of herself that she has previously not accepted lead to pleasure, devotion and empathy. In a way, the process itself was a powerful act of self love.

The song Chala Vahi, sung by Bindhumalini is a Meera bhajan and talks about how inconsequential materiality is, in that ideal world where love is supreme.

“Everybody talks about Radha-Krishna love, but what about that Gopi who is nameless and who has fervently loved Krishna too!” This Gopi that Akshiti invokes loves her friend or sakhi as well. She is not only interested in attaining love but wants her sakhi to experience it. “I want her to experience what I am experiencing too,” says Akshiti, ” I feel it, right here in my heart.”

It occurs to me while interviewing her that the contemporary artists for the evening have talked very differently about love than this young girl. She is well aware that her sense of love perhaps belongs to a different time. She is able to see this and yet insist on what her body and being are saying. If Krishna is that ultimate goal then so be it, if sticking within the form albeit playing with it is the best way to internalise, process and express this, then it is what she will do.

Ānurakti, after all is not just passionate love – it is a full embracing, “where your heart, mind and soul are involved.”

This intuitive artist has the courage to ask for what her craft needs. When Bindhumalini recently performed her song at Valley School where Akshiti teaches, “it did something to me inside.” She immediately approached the singer and got her permission to work with the piece. “I can’t put it in words, but I can feel it.” And this is perhaps why dancers, dance. Because the poetry of the body can embrace and transmit life experiences in a way not much else can. Because dance is not just metaphor but also presence, shaping fleeting realities in that hyper-committed embodied way, reminding us that this moment is all there truly is. This is perhaps why the classical dance idiom is so special – because it is a repository and a living archive for all these moments and histories and brings them into the now, replete with all the inherent conflict and cohesiveness.

Beyond the passion and emotion, this young artist is a rigorous and disciplined practitioner. She often finds herself stuck, in the choreographic process and seeks out candid and critical feedback. In this work, for the first time she finds herself not physically, but emotionally exhausted. 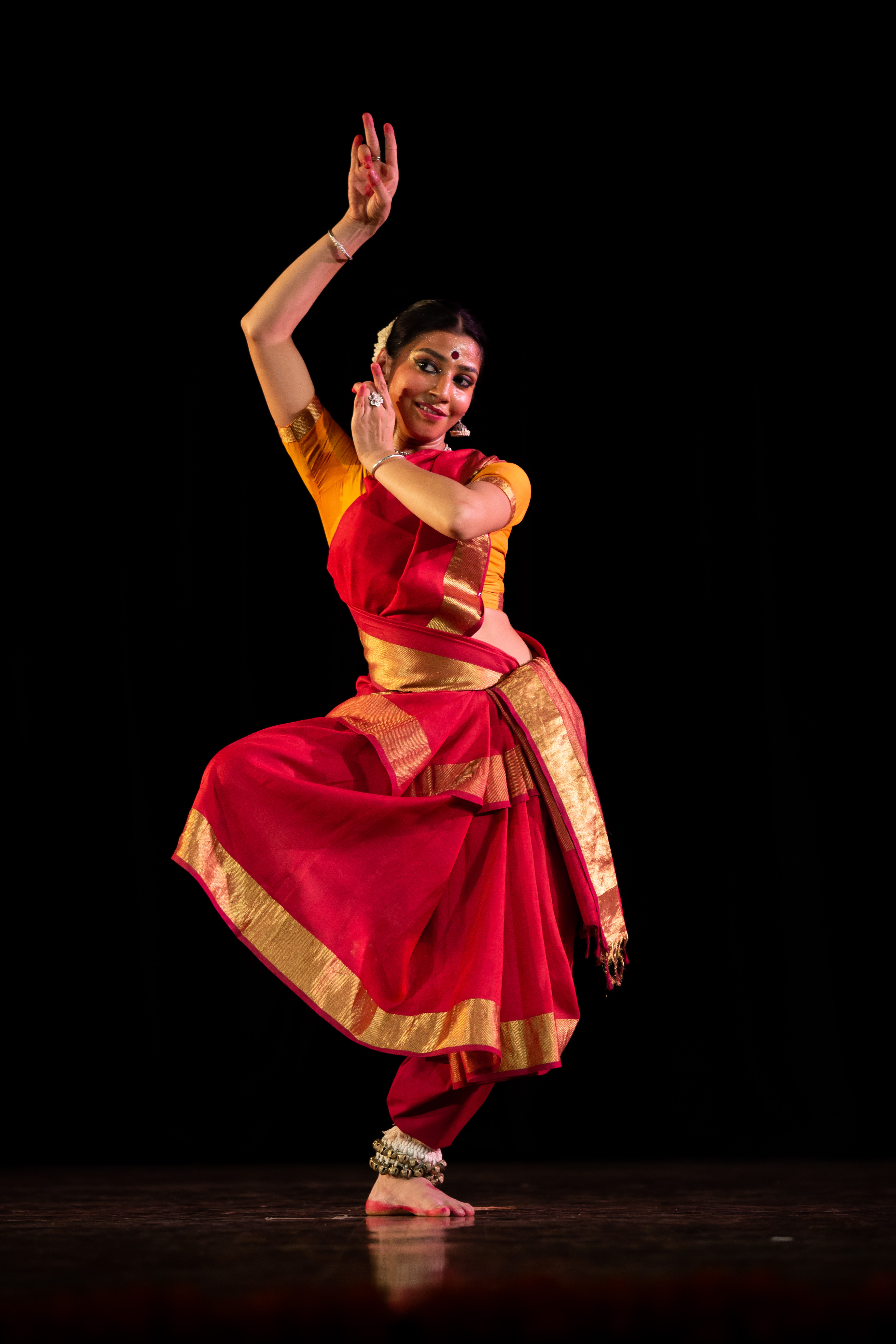 “All I can hear is your footstep, and you have arrived in the form of rain…” she narrates. To carry this reality around, to seek and anchor the beloved in nature, in the elements, and even in grief and loss has not been easy.

Much of Akshiti’s persona reflects her resilience. She was a part of the Nrityagram family where she trained under renowned teachers Bijayini Satpathy and Surupa Sen for seven years and performed worldwide. This forms a large part of her armour and her beauty. But there is a story within that shines out and illuminates the oh-so-carefully placed structure.

Yes, the eyebrow knows exactly where it is and the mudra manifests with perfect control, but underneath there is a shaking aliveness that makes her riveting to watch.

Talking about her relationship to dance, she says, “From childhood it was, is and will be with me.” One of her most intense loves has been her “Babi” or grandmother who has been both her mother and father as well as her best friend. The very same woman who pushed her out of the proverbial nest so her wings, or in this case dancing feet, could find their true destiny.

When Akshiti first encountered the reality of living upto the expectations a school as highly placed as Nrityagram demands, she called Babi and said, ” Babi, aami parbo na.” Which is Bangla for – Babi, I will not manage. Babi’s reply was, “Don’t tell me what you don’t want to do, tell me what you want to do.”

Later when she almost quit, it was another mother figure, her beloved teacher Bijayini who held space for her unconditionally and lovingly.

In 2015, Babi passed away, right after watching Akshiti perform with the Nrityagram ensemble. Akshiti never managed to articulate her love for Babi to her. Because of this, she is today more expressive and bold about her attachment to those she loves. That year, she decided, “From now on I’m going to talk. Life is full of surprises, good and bad. Whatever has happened, made me stronger.”

She also recently became independent and left Nrityagram, a place she says, “will always be home.”

Akshiti has made major life decisions right from the age of nine. A factor that makes her cautious even in her extroversion and determined enough to place stringent boundaries if she senses she is being made to compromise her selfhood and dance – “I will sacrifice anything for my dance, but not my dance for anybody”, she unflinchingly states.

Though surrounded by adulation, encouragement and an innate ability to connect with people, like many artists, there is this question of ‘where do we belong?’ Bravely, and again unhesitatingly, Akshiti declares, “I’m on my own. I just belong to dance. I don’t belong to anyone.”

Come watch this enigmatic human take the stage along with Deepak Kurki Shivaswamy, Mad Orange Fireworks – the band, Ainesh Madan and Paridhi Bihani, this weekend at Shoonya. You will experience Odissi, along with contemporary dance and rock music.